The official America’s Cup mobile app, produced by Dunedin based Animation Research Ltd (ARL), is making waves around the world. Yesterday the App had reached almost 300,000 downloads, and had been the #1 free sports app for iPhones in New Zealand for 5 consecutive days. The iPad app reached #17 in the top free sports apps in the US for a number of days and the iPhone app is still at #19. Around the world it is a #8 in Australia, #4 in Switzerland, #24 in Spain and #32 in the UK.
On Monday last week Apple featured it on the iTunes app store globally and last week tweeted news of the app to all its followers. “It looks like even the PM is using it,” says ARL CEO Ian Taylor. On Sunday night his office had said that while PM John Key would not be able to watch the race live, he would see some of it. "He watched this morning's start at the Air NZ lounge and then listened to the commentary as long as he could (before boarding another flight) on the America's Cup app." 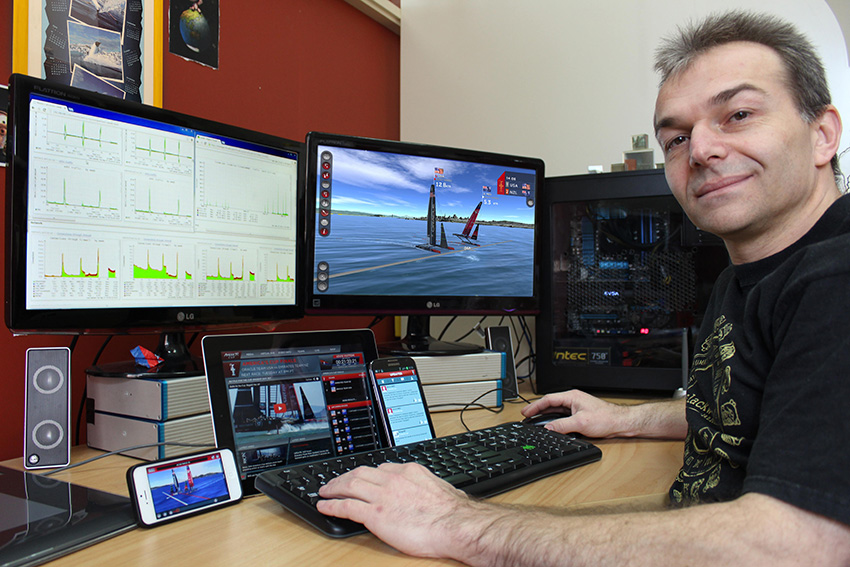 ARL Systems Manager John Jenkins, monitoring Virtual Eye App servers from the company's Dunedin offices.
The app also features a social chat platform designed by ARL and since 25th of August there have been 25,754,856 API requests made to the back office system. “Everyday since the America's Cup finals commenced we've been adding extra capacity to our systems to keep up with the demand. We are now running 10 load balanced servers and using over 500Gb of data during the 2 hour live window,” says ARL Technology & Innovation Manager John Rendall from San Francisco, where he is part of the ARL team working on the America’s Cup.
“One of the great things about this app” says Taylor, “is that we were able to involve a number of small New Zealand companies in producing it. A technology company from Queenstown, a design company here in Dunedin and a two man operation out of Timaru. It sends a really positive signal that you don’t have to up stakes and move to the big centres to create international products. And you certainly don’t have to leave New Zealand.”
“We are also very grateful for the huge support we got from Ian Burns, Team Performance Director at Oracle Team USA" continues Taylor, "Although we had never built an app of this kind before he supported us all the way through from inside the organisation. It takes a tremendous leap of faith for someone living and working out of the High Tech capital of the world to place such a significant project in the hands of a small company from New Zealand. Ian did that without hesitation, and then made sure we could benefit from all of his contacts, including those at Apple, to help us make this the app that it is.”